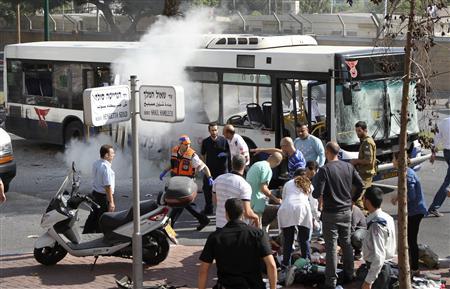 An explosion on a Tel Aviv passenger bus on Wednesday left 21 people wounded, two of them seriously.

Police officials said one terrorist managed to quickly plant a small bomb under a seat on the bus before fleeing the scene. A second terrorist who was also believed to be in possession of a bomb was tracked down and arrested.

Eye witnesses described a scene of panic as most onlookers were convinced that Hamas had made good on its earlier threat to resume suicide bomb attacks against Israeli civilians.

Whether or not it was actually responsible, Hamas claimed credit for the explosion, and mosques in Gaza reportedly erupted with joyous reciting of scriptures from the Koran.

It was later reported that Arabs in Lebanon, the so-called “West Bank”, and especially the Gaza Strip took to the streets to celebrate the targeting and wounding of Israeli civilians.

Palestinians spoken to insist that Tel Aviv bombing was a “natural response” to Israel’s blockade of the Hamas-ruled Gaza Strip and the “theft” of Palestinian lands.

Once again, it is very telling that the international media has all but ignored the celebratory response of Palestinians to the Tel Aviv bombing. Without question, were Israeli Jews to publicly celebrate the deaths of civilians in Gaza, the mainstream media would be talking about it for weeks.

Godfrey’s note: Of course this is the same Palestinians that were celebrating after the world trade center towers came down and thousands of Americans died.